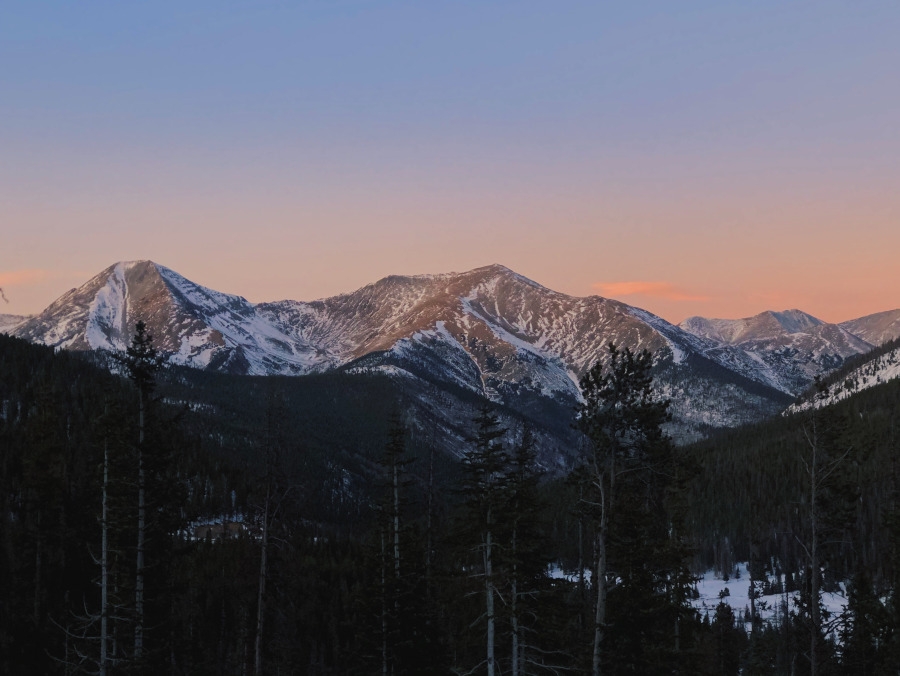 
On a Sunday morning in mid-October, Miriam, a current Hispanic Access fellow, and Andrea, a former fellow, waited for me outside the humble U.S. Forest Service trailer in Poncha Springs, Colorado. I scrambled to find my water bottle and some snacks, jumped into Miriam’s car, and we made our way over Poncha Pass, and into the San Luis Valley. We followed a dirt road along the base of the divine pinnacles of the Sangre de Cristo Mountains, a steep and expansive range resurrecting from the sand, rising from the valley floor like volcanic islands in a vast ocean; a spiritual site for the indigenous, a religious emblem for padres and conquistadores, and an immaculate panorama for fresh eyes on the Rocky Mountains. This dirt road led us to Great Sand Dunes National Park, a place recommended by many people I’ve acquainted throughout Wyoming and Colorado. 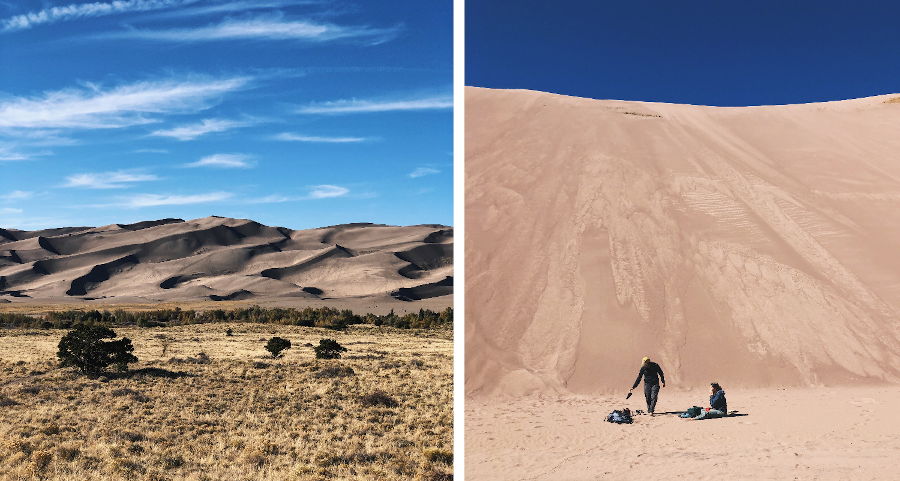 We spent a lazy afternoon on a sandy beach in the park, talking about our summers, discussing future plans, exchanging ideas, expressing our opinions on an array of topics, and every now and then, someone would grab the sled we rented, laboriously walk up the dizzying sandy hill, and glide down the slope at an accelerating speed with the other two down at the beach cheering and laughing. After a busy season on the trails, juggling projects and spending long days at the office, we finally had the chance to unwind, destress and detach ourselves from everything outside that sandy wilderness. Though we still had over a month of work left, the end of the season was finally here. We could feel it. On our drive home that evening, the three of us sat in a serene silence while watching the last rays of sunlight splash the San Luis Valley with blood orange. Miriam’s playlist complemented the feeling of a great journey’s end, and the luminous setting of the Colorado sun. Last Day on the Earth by Los Retros queued and, in the backseat, I absorbed every lyric:

Live in the moment

A few weeks later, I found myself driving down the same dirt roads to a home which I received directions over the phone the day before.

Deep in the piñon highlands below Crestone Peak, I arrived at an adobe home where Joe Vieira, the Planning and Environmental Coordinator for the B.L.M., was standing outside and waving in the direction of where to park my car. He and his wife welcomed me into their home, which felt as though I’d stepped into a Spanish past. Walking through the foyer was like traveling through centuries of Hispano history, and as I entered la sala, the natural lighting from a late-morning sun, the ristra hanging by the kitchen window, and the cool air insulated by the adobe walls brought me to the realization that I was not standing in a museum exhibit, nor was I in one of the “whitewashed” adobes built during the U.S. Spanish Revival era, but I was in the presence of a tradition handed down throughout generations. While the Vieira adobe is only a couple of decades old, the hands that built it were disciplined by Hispano tradition, the blood spilled during construction came from the veins of pastores and rancheros ancestry of the Southwest, and the sweat that dripped was the same perspiration that has preserved the culture of the Hispano, el mestizo, and the Mexican Southwest.

Joe and I took an afternoon hike through the piñon forest, and returned to the adobe for lunch with his wife, and their dear friend, Belinda Garcia. Belinda was one of the first movers and shakers of the Chicano/Chicana Movement of the 1960s, a walking legend of la raza, a dignified and sophisticated Chicana which I had the pleasure of conversing that afternoon at the adobe. The moment felt historical: the day when the elders provided wisdom to the young adult, the hour when the energy of a half-century-long movement was transferred over to the next generation, the point where the paths of incredible journeys intersected. Later that evening, while back in the modest U.S. Forest Service trailer, which sits in a dusty parking lot off of the “Loneliest Road in America,” I summarized my experience in an Instagram post:

Coming from Southern California, there’s so much to learn about Hispanic and Chicano culture of the Southwest. Our histories, cuisines and traditions differ in many ways, but we share a similar story of migration, an inter-generational commitment to preserve culture, and the perpetual conflict of the Chicano identity. After spending an afternoon at the Vieira Adobe in Southern Colorado, I have found another reason to be grateful for the people I’ve met in this state, and their willingness to pass on their knowledge to the next generation.

Throughout the five months of living in Colorado, I’ve crossed paths with great minds, leaders of communities, and individuals who have faith in the future. I am thankful for all the agencies and organizations that provided me the opportunity to learn, the platform to express my ideas and explore my creativity, and the people who went out of their way to help me grow. This experience has been life-changing and existential, and I am truly grateful for every person I have met along the way. While commitment and attachment to this community fill me with hesitation to leave, the road back home to California awaits. With that, I will end this final account as the first Communications Fellow at the Salida Ranger District with lyrics from Little Blue by Martin Courtney:

Look at all the miles in the mirror

All the pavement in your past

Everyone brought you that much nearer

Till you found yourself home at last