So Long and Bee Well


Welcome to another blog update from here in the heart of the Rockies in Colorado.

Today I'll be sharing more experiences I’ve been lucky to have with the Forest Health crew at the Gunnison National Forest. The forest pathologist generally has a lot on their plate when they consider forest health. If you thought beetles were the only problem our forests faced… well, you’d be surprised! Trees in our national forests can find themselves plagued with a number of diseases and pests. One threat we may not think about right away is fungi. 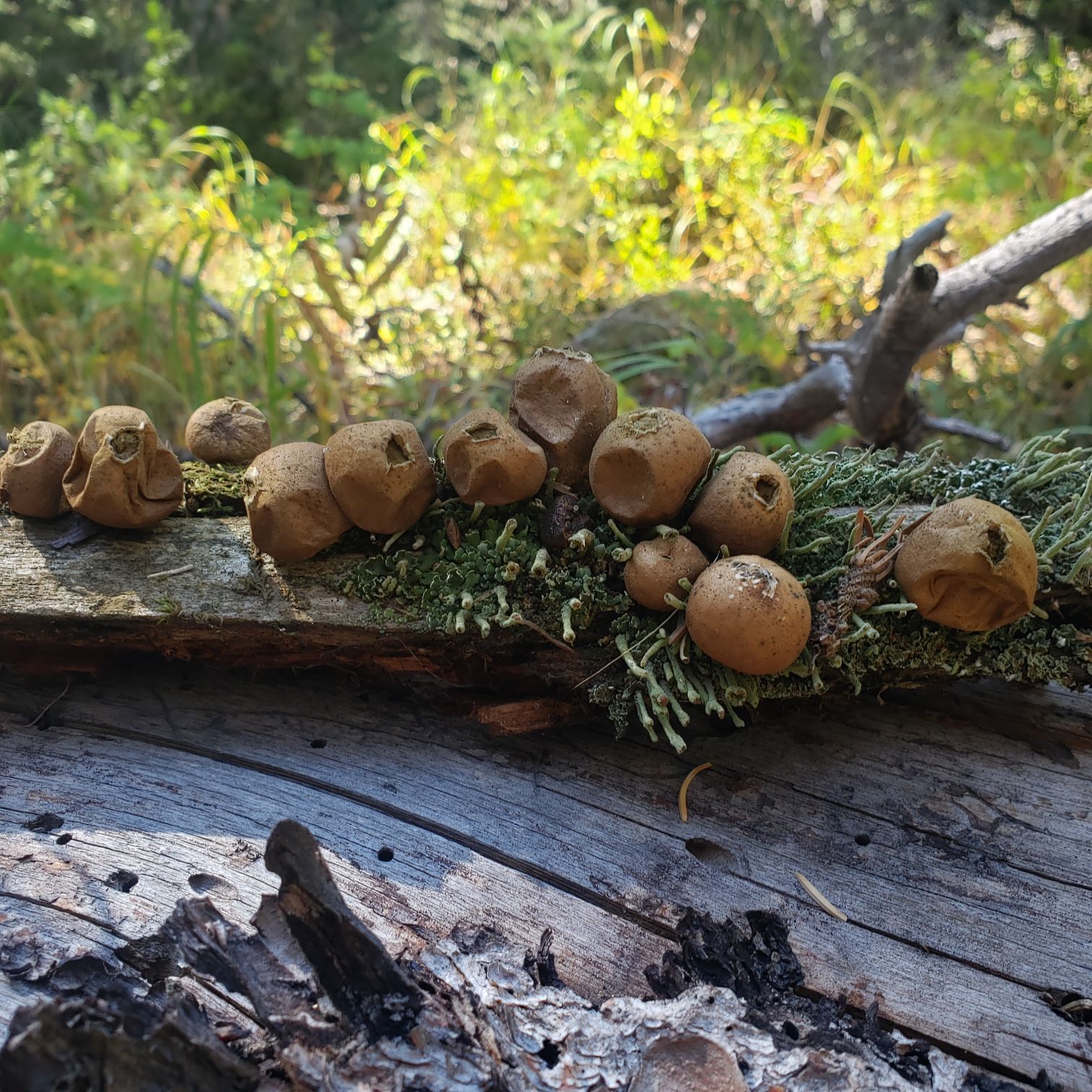 Not fungi like these, though. These puffballs are both fun for us and harmless to the trees we were looking at.

I went out with the Forest Health crew for a day to help collect data in stands with plenty of douglas fir around. Douglas fir is not the only kind of tree the forest pathologist is interested in, but these plots needed to be in good stands of douglas fir for sampling purposes. I helped collect DBH which means diameter at breast height. DBH helps us measure & document how large the tree is and can help estimate age of the tree as well. Of course, there is much more going on in these plots. I was just one out of six people on the crew that day. We had folks taking cores from the trees and checking roots for funky fungi – all in the name of forest health! 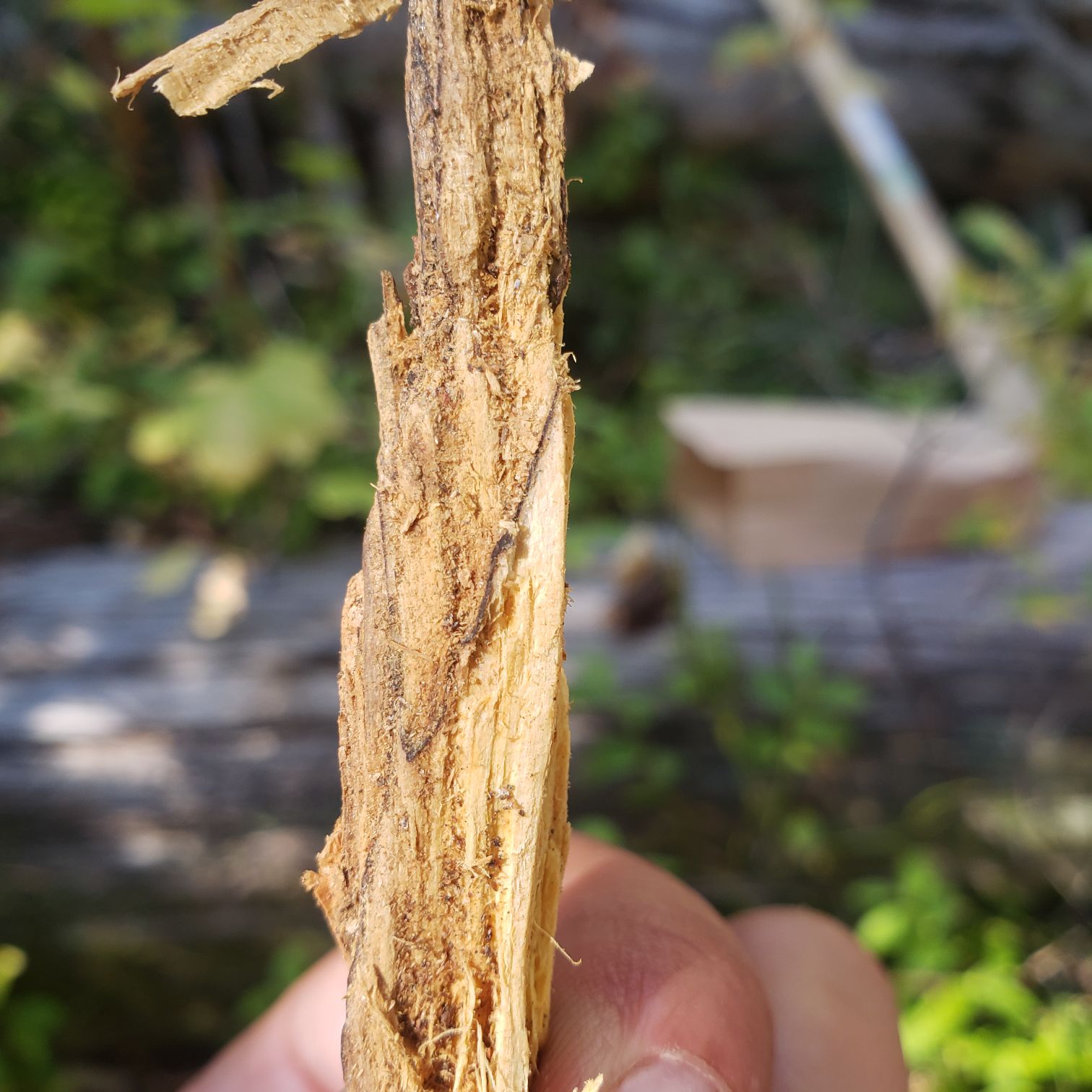 There are two funal organisms shown here. Do you see that dark line shooting diagonally across this piece of bark? This line was actually created by one of the fungi to separate themselves from the other fungus that is on there as well. This way, each fungi can have their own space and food resources without overcrowding. You could say that fungi really know how to set their boundaries!

No complaints from me about the office location that day either. In order to get to the plots, we had to hike on the Judd Falls trail and Copper Creek trail near Gothic, CO, which if you were not already aware, is nothing but stunning views all around. 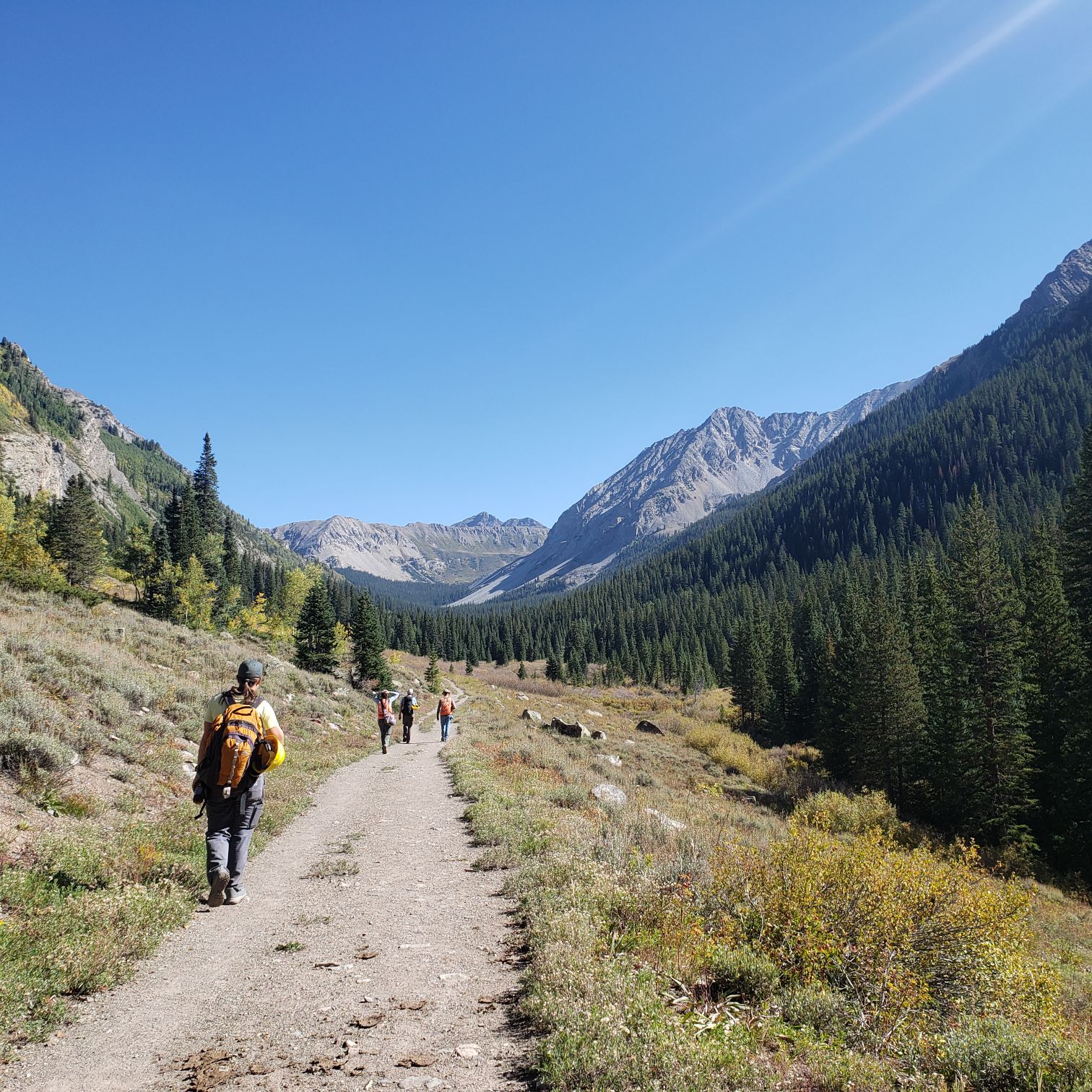 Hiking to our plots in the Copper Basin, Gothic, CO

A few weeks later, and I was back with the Forest Health crew – this time doing some community outreach! There is an annual meeting in the valley called the “Mill Creek Youth Summit” which is attended by students in both grade school and college. There are several stations at the Youth Summit and I had the pleasure of handling the Forest Health station along with one of the wise, permanent technicians in the crew - Sue. Sue was in charge of talking about many of the forest pests that they have to manage for, all while using a ton of fun props she’d brought along for the day. I was in charge of talking about pollinators – which is a subject very dear to my heart since I just successfully completed a masters degree on pollination ecology this year! I never get tired of talking to folks about pollinators. The endless log of fun pollinator facts I have stored away in my brain is dying to get used for something like this!

Our Forest Health station at the Mill Creek Youth Summit

Anyway, our station was a success and it was nice getting to do something different for a change. The only thing I wish we could have changed was adding more time to get out there with nets to catch bugs! But, you can’t have it all, I guess.

If you’re bummed that you weren’t able to hear some pollinator fun facts, take delight in knowing that I will drop some here in this post, so that everyone gets a chance to learn something (possibly) new.

First, did you know that there are more pollinators than just butterflies and bees?

Insects such as flies, beetles and wasps can also pollinate plants. For some flowers on our planet, these pollinators can be more important than bees! 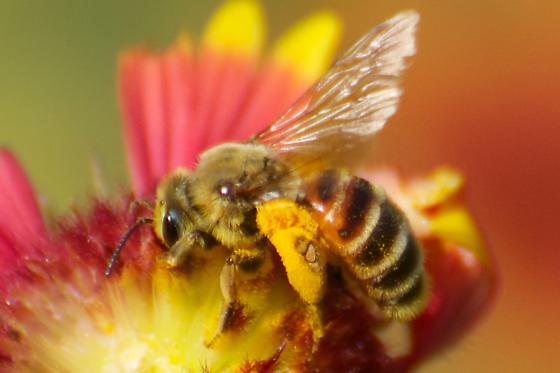 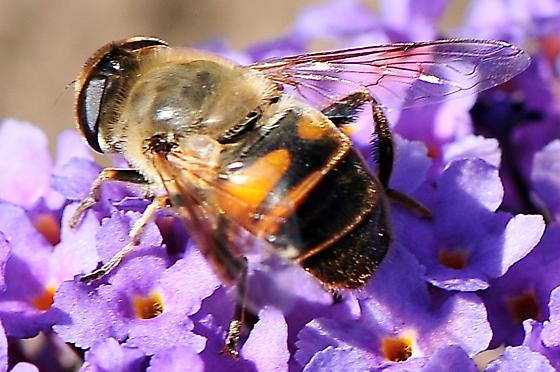 The picture on the bottom is a photograph of a syrphid fly; a bee mimic. Syrphids are a large group and to the unfamiliar eye, they are often mistaken for bees. You can tell the difference in these pictures because the fly does not have a thin waist that tapers to the abdomen; nor does it have specialized pollen-collecting hairs on its legs to collect pollen. The fly's eyes are also set closely together, almost to the point of touching, which you will not find in a bee. However, in some regions of the world, syrphids still play an important role as pollinators.

Now let’s look at this interesting individual right here. Would you say this is a wasp or a bee? 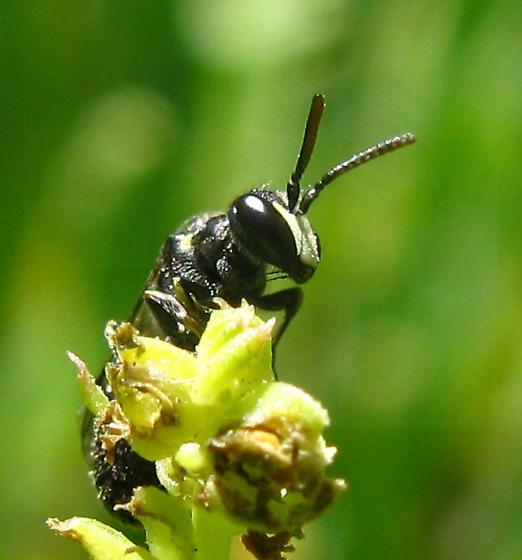 While it may look like a wasp, this is actually a species of parasitic bee from the genus Hylaeus. Did you know there were bees that actually parasitize other species of bees? Parasitic bees are often closely related to their host species and will typically be in the same family. Hylaeus bees are in the family Colletidae. Parasitic bees do not have pollen-collecting hairs (scopa) like their relatives, but they do still consume pollen and nectar. Unlike wasps, bees are vegetarians and do not consume other insects. Wasps can consume pollen and nectar, but they also rely on insect prey such as flies (yes, like syrphid flies – kind of cool to watch if you happen to see a wasp hunt a syrphid).

One final cool fact before I end this post:

Species in the genus Hylaeus use their own “glue” to build their nests. They produce this substance to line the cells of their nest to protect it from the elements getting in - even bacteria! Scientists have found that this substance can withstand a lot of things and so far, they have proven its resistance to extreme heat and corrosive chemicals. Man, they must have one crazy, secret ingredient!

Well, with that, I must end this blog on a bittersweet note. This is actually my final post here during my fellowship at the Gunnison National Forest. Where did the time go?! I’ve absolutely had a blast here in the Rockies. It’s honestly going to break my heart to leave this area. This has been an incredible opportunity that I never thought I would have and it wouldn’t have been possible without the folks from the Gunnison National Forest and the Hispanic Access Foundation. I’ll be leaving piece of my heart when I leave the Rockies, but thanks to all of the friends I have made here – I have an excuse to come back!

Again, loads of thank-you’s to all of the friends I have made here, the employees at the Gunnison National Forest, the Hispanic Access Foundation and to anyone who took the time to read my blog posts. You’ve all contributed to making my summer the best it could possibly *bee. 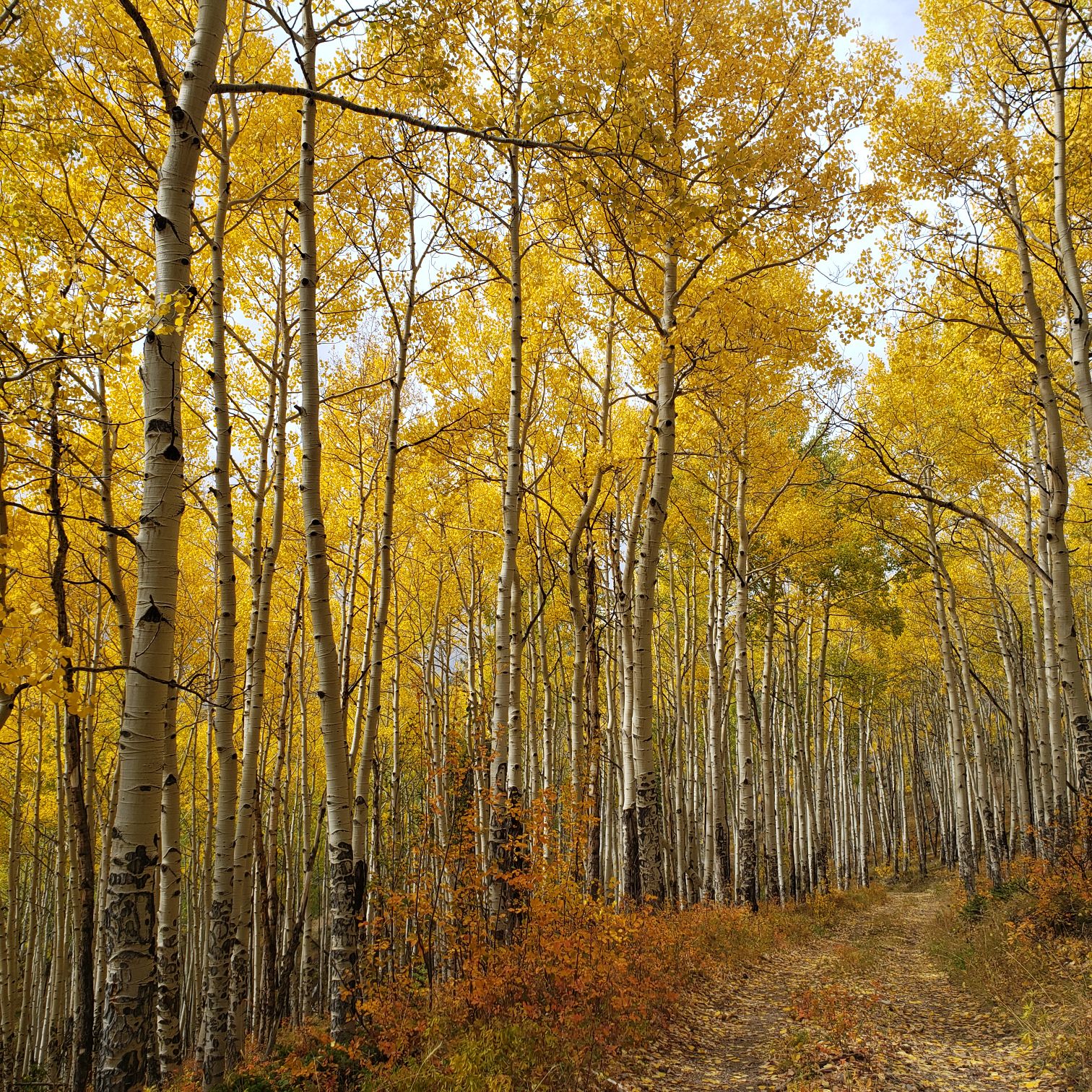 Enjoy one last photograph of a trail in the Almont Triangle lit up by glowing, golden aspen.