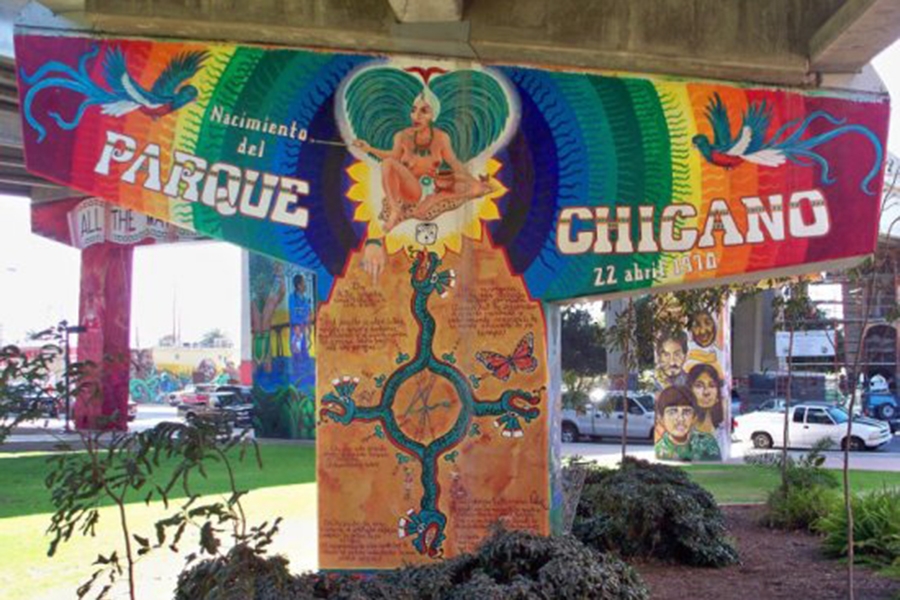 “The inclusion of Chicano Park as a National Historic Landmark is important because today less than 8 percent of the 2,500 National Historic Landmarks represent ethnic and minority groups,” said Manuel Galaviz, a University of Texas graduate student who co-authored the initial nomination. “This does not indicate that ethnic minorities have not contributed to the making of the United States; rather it is reflective on the limited access these groups have had towards claiming, conserving, and preserving their social history.”

Galaviz served as a Hispanic Access intern as part of the National Park Service’s Latino Heritage Internship Program during the summer of 2015. In this capacity, he co-authored the National Historic Landmark (NHL) nomination for Chicano Park, which was later unanimously approved by the NHL committee to be recommended for designation.

Chicano Park was created in 1970 after residents of Barrio Logan protested the construction of a California Highway Patrol Substation beneath a nearby bridge. Residents in the community united to initiate a nonviolent people’s land takeover and prevented the development. The National Historic Landmark validates the work of many including Josephine Talamantez, a founding member of Chicano Park, author of its National Register nomination and co-author of the National Landmark nomination.

“Chicano Park listing as a National Landmark is a validation to the Chicano/Latino/Indigenous community of the San Diego/Tijuana Border region and the Nation as a whole. This commemoration recognizes the local Chicano community’s efforts at self-determination. We defined and honored our contributions towards the building of the City of San Diego—economically, socially, politically, and culturally,” said Talamantez. “Prior to the establishment of Chicano Park the Chicano/Mexicano/Mexican American community was invisible to the powers that be. The establishment of Chicano Park brought pride and voice to our community and became the tipping point in our mutual relationships.

“We appreciate Secretary Jewell recognizing the importance of places like Chicano Park,” said Maite Arce, president and CEO of Hispanic Access. “This underscores the Administration’s focus on protecting landscapes and sites that ensue from the input of local communities and tell stories that share our rich and diverse cultural history.”