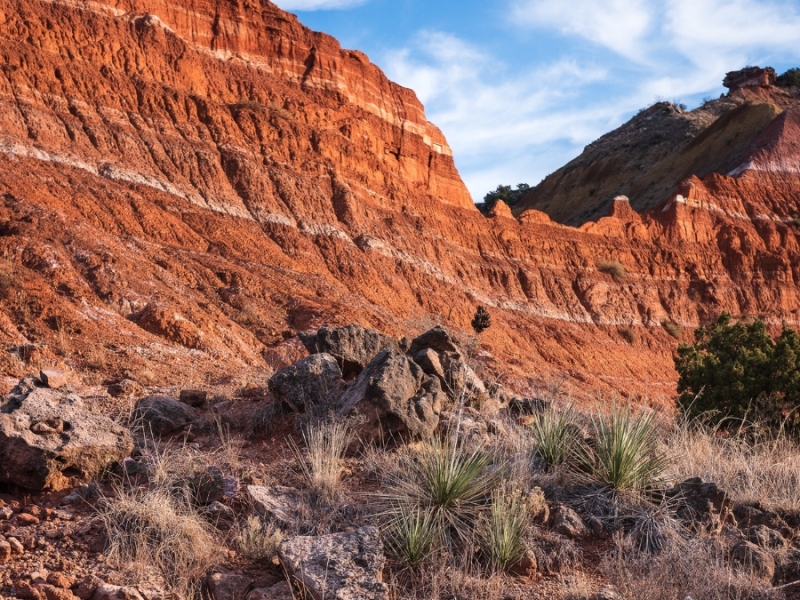 A delegation representing the Castner Range Coalition traveled from El Paso to Washington DC last month to meet with federal officials and make the case for declaring Castner Range a national monument.

Coalition members returned optimistic that the Biden administration has received the message that El Paso supports the designation of a national monument. U.S. Rep. Veronica Escobar, D-El Paso, has introduced legislation to protect Castner Range. But to avoid legislative gridlock the coalition is calling on President Biden to use the Antiquities Act to declare a national monument.

Coalition partners including the Frontera Land Alliance and Nuestra Tierra Conservation Project say protecting Castner Range is in keeping with Biden's conservation agenda and this administration can deliver on the decades-long campaign to protect the area.

"We're waiting," said Janae’ Reneaud, executive director of the Frontera Land Alliance. "We're being optimistic and every conversation gets us one step closer."

Coalition members had meetings with the Department of Defense, Department of the Interior and the Bureau of Land Management during the visit timed with Latino Conservation Week, which ran from July 16 to 24. They also delivered 137,000 signed letters to the president in support of the designation.

“We weren't told no,” Reneaud said of conversations with relevant federal decision-makers. “From what I can see, everybody's behind this and there is no opposition.”

Part of the Franklin Mountains, the Castner Range is a 7,000 acre area of federally-owned land in Northeast El Paso currently managed by the Department of Defense.

Since the 1970s, El Paso community groups have advocated for Castner Range to be protected. Fort Bliss used the area for weapons training and testing through the 1960s. Because military ordnance and explosives pose a safety risk, the site is closed to public access. The Castner Range Coalition has identified a national monument as the best way to protect the land and to eventually clear the munitions and explosives.

A trio of mariachis sung "Cielito Lindo" outside the staid Department of the Interior headquarters in Washington DC on the morning of July 19, kicking off a news conference of the Castner Range Coalition. File boxes full of signatures in support of declaring Castner Range a national monument were stacked in front of them.

“In El Paso, the community has seen their beautiful and beloved mountains slowly chipped away by industrial and housing development,” said Gabaccia Moreno of the Nuestra Tierra Conservation Project. “The people of El Paso deserve to protect the magnificent backdrop that is Castner Range.”

“The journey is not over yet, but one day when that monument is named the journey will finally be over. And it will be because of the hard work of so many people,” Gomez said.

The delegation to Washington DC met with key stakeholders in the process to establish and manage a national monument.

"These are people who are going to be involved when ideally this moves forward as a national monument," Reneaud said. "They met our local leads and were able to listen and ask questions."

Either Congress or the president can establish a national monument, which is a designation to protect federal lands for present and future generations. The National Park Service manages most of the existing national monuments but the Bureau of Land Management and the U.S. Fish and Wildlife Service manage others.

The delegation met with Army Undersecretary Gabe Camarillo, who is from El Paso. The group also met with Brenda Mallory, Chair of the Council on Environmental Quality, who advises President Biden on environmental and natural resources policies. In the Department of Defense, they met Paul Cramer who is performing the duties of Deputy Under Secretary of Defense.

Secretary of the Interior Deb Haaland visited El Paso and Castner Range in March. During the July trip to DC, coalition representatives met with Laura Daniel-Davis, a deputy assistant secretary at the Department of the Interior.

Coalition members responded to questions about the hazardous materials on the Castner Range and how cleanup could proceed if the land becomes a national monument.

"What we will have to do eventually, when the time comes, is to determine what should be accessible and what is not accessible," Reneaud said. "Fort Ord in California is an excellent example of that process... they have similar situation and part of it is open to the public and part of it is not."

Fort Ord National Monument, near Monterey, California, was established in 2012 on 14,658 acres of public land that used to be a military base.

"What we learned is it's possible and it's being done," Reneaud said.