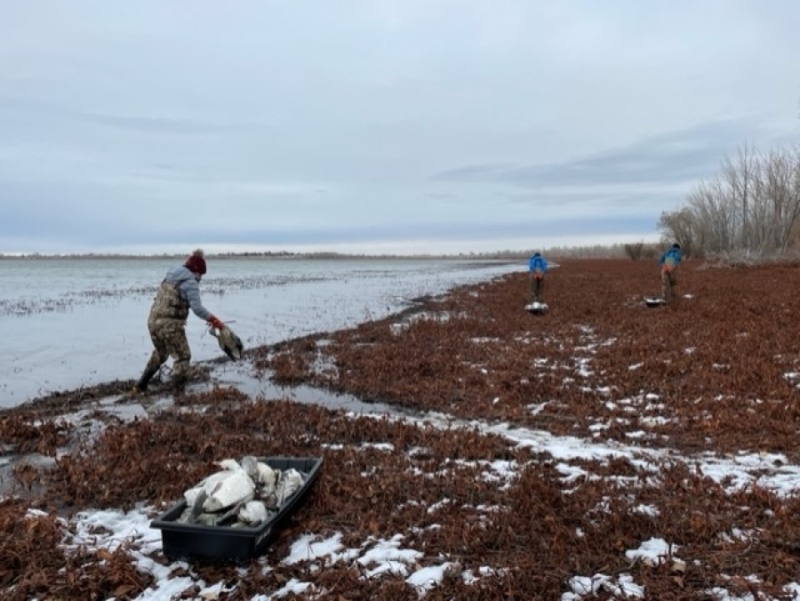 Throughout the summer, Deer Flat National Wildlife Refuge was hearing how avian influezena was spreading throughout the nation. It was a concern that still seemed distant from us, but nevertheless information was shared with the public and rehabilitators were not taking in birds to help slow the spread. Fall came around and avian influenza was still present and reaching its way through the west coast. Current articles now stating that that avian influenza has reached Alaska. With known cases being in two foxes and two bears in Glacier National Park. As time went on the Visitor Center began to get numerous calls from visitors saying they saw thirty to sixty dead birds on the shoreline of the lake. This number increased greatly within days, with people stating they estimate there were almost hundreds of dead birds. With the end of November came the news of avian cholera possibly being present in the state of Idaho which could better explain the large die off. Avian cholera, I soon learned was a fast-spreading bacteria that can kill birds within two days. Leaving the dead birds out on the refuge was also a greater risk as the bacteria can impact living birds who flocked near the bodies. As the number of dead birds grew and became even more visible to visitors, action had to be taken. The refuge began working with Idaho Fish and Game and other partners (volunteers, Ecological Services, marine patrol, etc.) to remove the birds. The birds that were mainly being impacted by the disease were mainly snow geese, but we also found a few Canadian geese and mallard ducks. Unfortunately, during these pickups we also ran into live birds who presented symptoms. The main symptom for an ill bird was that it would not fly away if people were near it. Leaving the live birds who were clearly sick was not option as there is no cure for them and they could continue to spread the illness. This meant that they also had to be disposed of. For two days from 10am to 4pm, all partners who were able to make it came to pick up the dead birds. Such a quick mortality caused issues, from one day to the next we had to recover our traces and pick up the newly dead birds. In these two days alone the Refuge Manager of Deer Flat NWR estimated that we had picked up around 2,5000 birds. Once the birds were picked up, the plan was to bury them so that the spread of the suspected disease, avian cholera, could be slowed. Even with such a devas ting event at hand it was amazing to see how people different organizations can come together within a days’ time to try and improve the situation. I know these groups would not have come so quickly if it were not for the strong relationships that the Refuge Manager had with these organizations. Without his dedication to work with others to create a support system for all I am sure the results may have been different. I am glad that I was able to support the refuge in picking up the birds, while meeting other amazing people who work in wildlife in one way or another. Seeing the quick organization and leadership of the Refuge Manager has become a level to strive for in not just difficult times but in all aspects.