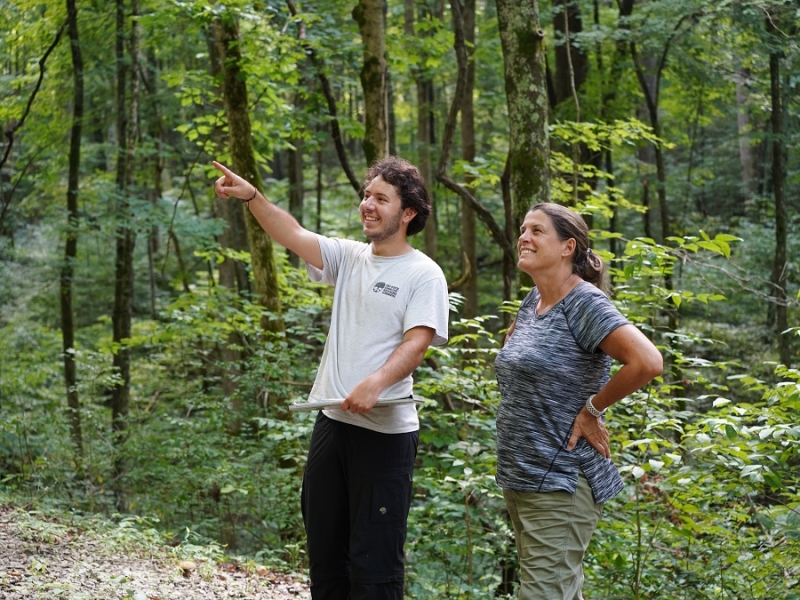 
Are you tired of gloomy skies and freezing weather? Do you find yourself daydreaming about the warm and sunny days of summer and fall? Well, maybe I can help with that. No, I can’t change the weather, but I can take you along my summer journey. This will be a rather long blog post; so sit back, grab a cup of hot cocoa, and read along!

To give y’all some context, I’ll start with a brief overview of my position. I’m one of six Civilian Climate Corp Fellows, a new program established in partnership with the Fish & Wildlife Service (FWS). We’re all stationed at different National Wildlife Refuges, from South Carolina to Alaska! I’m working at Big Oaks and Muscatatuck National Wildlife Refuge Complex, in beautiful Southeastern Indiana. In collaboration with Refuge staff and FWS climate experts, I’m assessing current and potential climate change impacts and will develop a suite of recommendations for how the Refuge can adapt to these changes. Ten months have passed since I started this fellowship; I could write a whole book about all my experiences. However, I’ll stick to those mentioned in the title for the rest of this blog.

Songbirds. May arrived, and suddenly migratory and nesting songbirds were all over the Refuge. There were bright blue indigo buntings, golden yellow warblers, and the ubiquitous red-winged blackbirds. However, there was one bird that I enjoyed looking for the most: the Henslow’s sparrow. A rare grassland bird, Big Oaks hosts one of its largest summer breeding populations. Quality grassland habitat in the Midwest is rare and declining, thus maintain them in the Refuge is of vital importance. Staff perform annual surveys every summer to monitor for the Henslow’s abundance in each of our grassland units. They use this data to decide whether it is time to perform a management action such as a prescribed burn. Although I had to be up by 5 am, I was grateful to practice identifying bird calls and learn about the importance of monitoring!

Now for the second part of the story: Butterflies! These important pollinators dotted the landscape with color throughout the summer. Common Buckeyes, Eastern Tiger Swallowtails, Pearl Crescents, and many others were plentiful. At the start of August, I attended our annual volunteer butterfly count. A nationwide program led by the North American Butterfly Association, it relies on collaboration and passionate volunteers to conduct a one-day census of all butterflies sighted within a designated area. The collected data is then compiled to track trends in species population and species diversity over time. Scientists then use this information to focus our attention on rapidly declining species, such as the Monarch butterfly.

Although I love working outside, I spend most of my time this summer working on my climate project. I used my findings from an extensive literature search as input on existing tools to assess the climate vulnerability of several species that inhabit or use the Refuge. Unfortunately, priority species like the Henslow’s sparrow and the Monarch butterfly may be vulnerable to potential climate impacts like an increase in heat waves and changes to precipitation. For example, models suggest that the Henslow’s sparrow’s population may be unable to shift north due to the lack of suitable habitat. Monarch butterfly caterpillars are negatively impacted by very high temperatures. However, it’s not all bad news. I’ve learned that there are things we can do to reduce some of the potential impacts of climate change to vulnerable species. Next January, I’ll begin to brainstorm strategies that Refuge management can take to help these species!