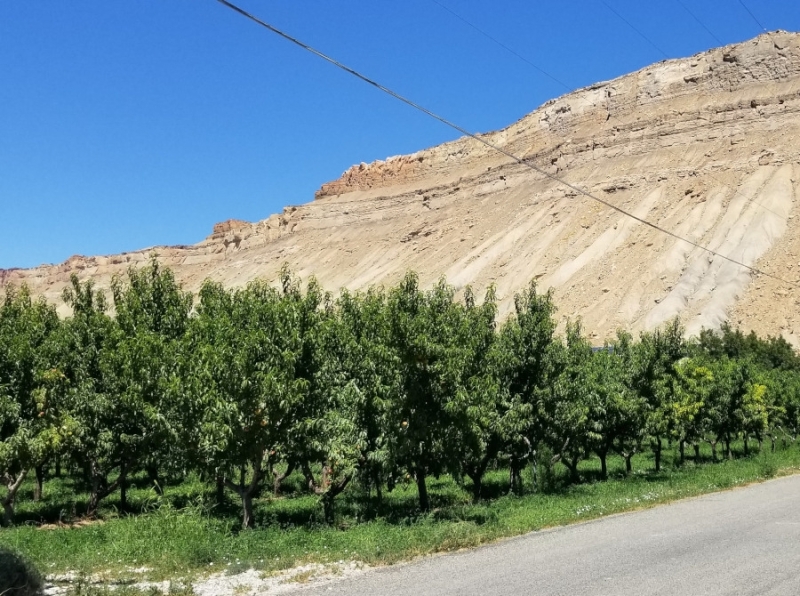 Hello, everyone, I hope you are all having a wonderful holiday season. It is full on winter on the Pike National Forest now, there is snow on the ground and the days grow shorter. Although it is winter, I was thinking about how earlier in the summer I was able to go out to the Colorado State Insectary in Palisade, CO for a tour of their facility, and to talk about biological control. Biocontrol in invasive plant management is using a plants natural enemy to bring the plant population to a manageable level.

Bio control agents can be insects (most common), fungi, or pathogens such as bacteria. Colorado is one of a handful of states that has an insectary, or a place where they raise insects to be used for biocontrol. The state insectary was originally created to help peach growers fight back against the peach moth (Grapholita molesta), which after being introduced in the early 1900 to the US, spread westward to Colorado peach growing country. The first insect reared at the facility was a species of parasitic wasp, Macrocentrus ancylivorus, that lays its eggs in peach moth larva. The biocontrol introduction was a great success and from there the program grew. This wasp species is still being raised and released to this day. You can read more about the Colorado State Insectary here and read about one of my favorite bio control success stories here.

Now, you may be wondering how bio control agents are even found in the first place. Usually, entomologists will look at invasive plants in their native range to try and find insects that only feed on that particular plant. This host specificity is very important because insects can also become invasive pests as well. Once a particular biocontrol agent is identified, it goes through a rigorous, multi-year process that determines if it will survive on other plants. The biocontrol agent is reared in a controlled setting, still out of the country, and it is given different types of agriculturally or ecologically valuable plants to try and complete its life cycle on. If a biocontrol agent is found to damage or destroy these plants, it is not brought into the country. On the Pike National Forest, a few different biocontrol releases have taken place, and the biocontrol insects have been found in subsequent years. I am hoping to expand some releases for some of our more widespread invasive plants such as yellow toadflax (Linaria vulgaris) and Canada thistle (Cirsium arvense) in the future.

Biocontrol should be an integral part of any integrated pest management program; however, it does have limitations. Since biocontrol agents need the invasive plant or insect species to complete their life cycle, they will never completely eradicate the invasive. Biocontrol agents can also be tough to establish, especially in areas that have different climatic conditions than their native range. The goal of using bio control is to bring the invasive plant population to a managed level that reduces the impacts of said plant. If you have any newly introduced invasive plant species that pose a serious agricultural or ecological risk, other control methods are necessary to eradicate them before they become established and widespread. With that being said, I am thankful to have such industrious insect (and human) friends helping keep invasive species at bay on the national forest.

Networking lunch with those who attended the tour. PC: Marisa Neuzil