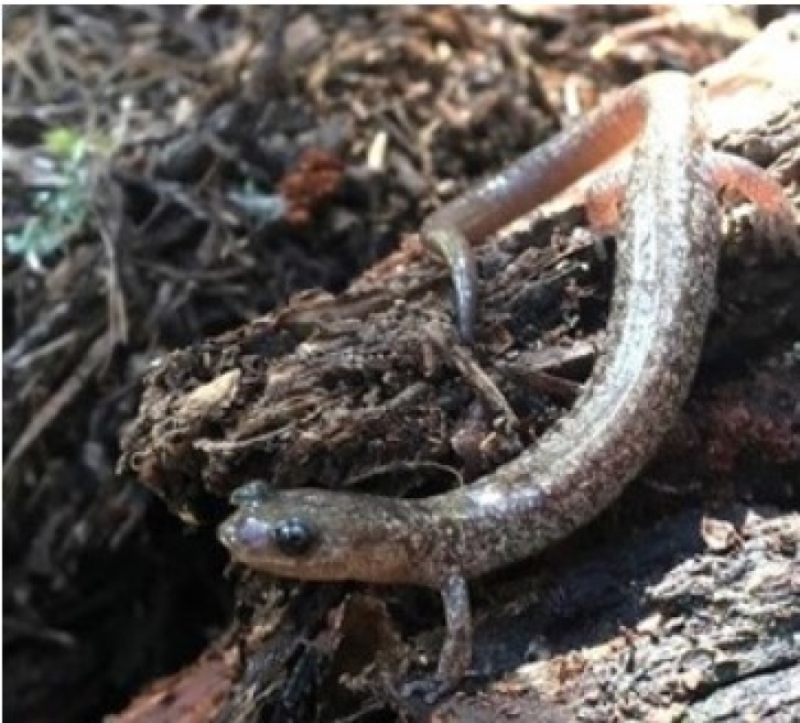 In Search of Salamanders: Endemic Salamander Surveys in the Mountains of New Mexico

My name is Kim Haab and I’ve had the pleasure of serving as a fellow with the United States Fish & Wildlife Service (USFWS) Directorate Fellowship Program (DFP). During this fellowship I have been based out of the New Mexico Ecological Services Field Office (NMESFO) in Albuquerque, NM, but my position has me in the field far more frequently than in the office. I’ve gotten to spend most of my time outdoors, hiking around beautiful mixed-conifer forests in search of salamanders. Although most of my previous research experience has focused on birds, my introduction into the world of herpetology (the study of amphibians and reptiles) has been an experience I won’t soon forget. While I’m used to gazing upwards through binoculars, I’ve turned my gaze downward for 11 weeks in an attempt to locate one of the rarest species of salamander in North America—the Jemez Mountain Salamander (Plethodon neomexicanus). 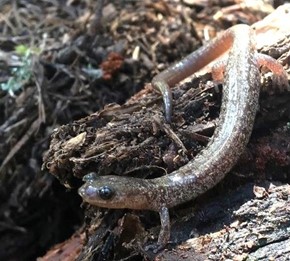 The Jemez Mountain Salamander is listed as a federally endangered species under the Endangered Species Act. This species has seen precipitous declines and wide scale loss of habitat due to high-severity wildfires in recent years. It is endemic to the Jemez Mountains of northern New Mexico, which means it is found nowhere else on earth. As a salamander in the family Plethodontidae, the Jemez Mountain Salamander is lungless and entirely terrestrial, relying on moist and cool soil conditions to breathe through their skin. Many knowledge gaps remain related to the biology and life history of this species, due in part to the fact that this species spends the majority of its life underground, emerging only during the summer monsoon season to brave the surface in search of food and mates.

The rains that bring this salamander to the surface also bring the stakeholders who care about its existence away from the office and into the field, with search efforts concentrated during the monsoon months. This includes personnel from a variety of federal agencies such as the U.S. Fish & Wildlife Service, Valles Caldera National Preserve, Bandelier National Monument, and the U.S. Forest Service Santa Fe National Forest, state agencies such as the New Mexico Department of Game & Fish, and researchers from the University of Rhode Island. Caring about this species is the easy part, finding it is a whole lot harder. 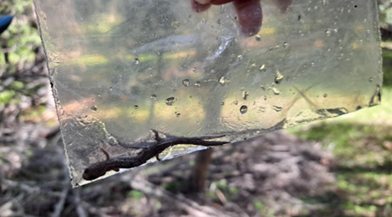 Surveys for the Jemez Mountain Salamander take place in high-elevation mixed-conifer forests and involve turning over cover objects on the forest floor to see what’s underneath. Most of the time you are met with either nothing or a myriad of insects and invertebrates, unhappy to be disturbed and thrust into the light of day. Occasionally, you turn over a cover object and are met with the startled bug-eyed gaze of a salamander. A surge of adrenaline hits you and you gleefully shout out “Salamander!” to the other members of your survey team. Heart pumping, you gently pluck the salamander from the safety of its cover object, store it safely in a moistened Ziploc bag, and then eagerly collect body measurements and habitat data from the cover object under which it was found. Once the data is collected, the salamander is released and prodded back under the safety of its cover object, which is my favorite part of the process. 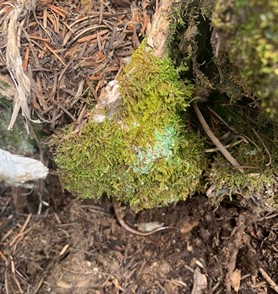 A salamander retreating back under the safety of its moist, moss-covered cover object.

A lot of my time in the field has been spent not finding salamanders, but the instances when we do find them makes the hours and weeks of searching worthwhile. After all, they are endangered for a reason. Getting to see and hold an endangered species has been one of many highlights from my fellowship experience thus far. I’ve had the pleasure of finding four Jemez Mountain Salamanders myself and have had the joy of being present for several other successful captures. In the remaining weeks of my fellowship, with the frequent monsoon rains, I am hopeful that we will find even more.

The data about where we can find this species and the accompanying habitat characteristics of the areas in which they are found will help to inform future management decisions and will aid in the recovery effort for this species. I have been honored and privileged to play a role in this important conservation work. I’ll no doubt be fighting the urge to check under cover objects as I walk through forests for weeks if not months to come following my fellowship, and I am grateful for the new perspective I’ve gained researching an endangered amphibian. While it is a lofty goal for the Jemez Mountain Salamander to one day recover to the point where its listing can be downgraded from endangered to threatened, it is one I wish for nonetheless.