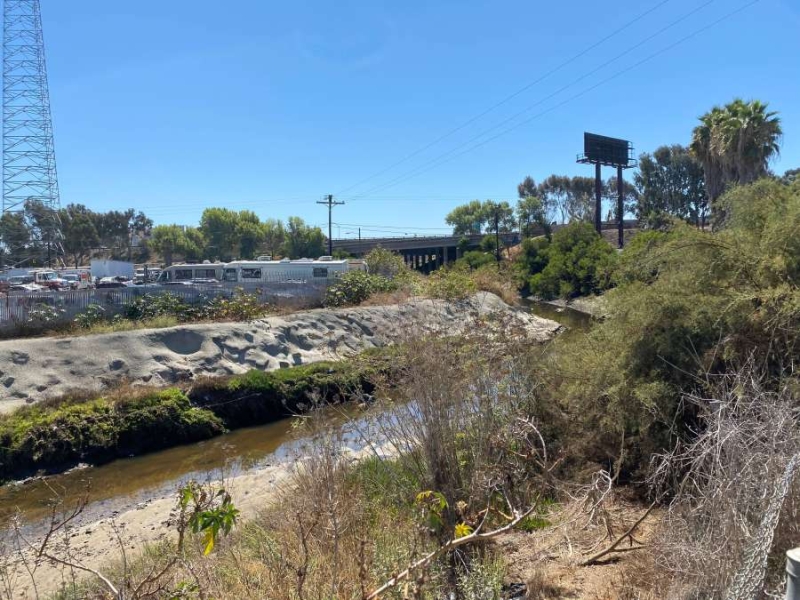 
We were not just chilling in the creek, but it made for a better title.

The federal government was thankfully spared from a shutdown last month, which allowed us to visit one of our RTCA project sites down in sunny San Diego. Fellow Kat and I have supported Anne Dove on her bike path project with Groundwork San Diego for the past few months as part of our work assignments. So far, the project has failed to disappoint, and we continue to grow more inspired by the project, our partners, and the community that the park will serve.

I chose to support this specific project because the bike path would transform the predominantly-Latinx Barrio Logan community. The region is one of the poorest and most park-deficient areas of San Diego, and the bike path would provide much-needed recreational opportunities for residents. In addition, the project is part of a larger plan to create a regional park in the Chollas Creek Watershed in Southeast San Diego, and the project would connect the community to the larger San Diego Bayshore Bikeway.

Groundwork San Diego has advocated for this project for over a decade, but city leadership lacked the agency to make it happen until recently. Since we joined the project, Groundwork has had tremendous successes, including adding the regional park in the City of San Diego’s Plan. I would highly suggest that those who take the time to read this blog also invest in learning more about the project at the link above. The video demonstrates how this project would promote transportation connectivity and safety in the community and how dynamic our project partners, Vicky Estrada, and Leslie Reynolds are.

Our project partners greeted us with a packet full of maps when we arrived Friday morning and were eager for us to join them in the creek. So we scooted our way down into the riverbed, and I was pleasantly surprised to see that the community was already using it. There were dozens of intricate graffiti illustrations, including Black Lives Matter, Fry from Futurama, Calaveras, and instructions on how to kickflip. Alongside various parts of the creek, you could see how the community had modified the space for their needs; they created makeshift benches, a pseudo-skate park, a home for several unhoused individuals, and a canvas for dozens of artists.

As we walked along the proposed path, I could envision what the bike path would mean for the community and the fantastic potential of the space. Vicky and Leslie beamed about the creek at every stop we made, and it was impossible not to feel as giddy they were about the project. The project visit affirmed the importance of meeting project partners and visiting project sites in person because Zoom and Google Earth limit the scope of our imagination and do not facilitate the type of trust that only taco lunches can build.