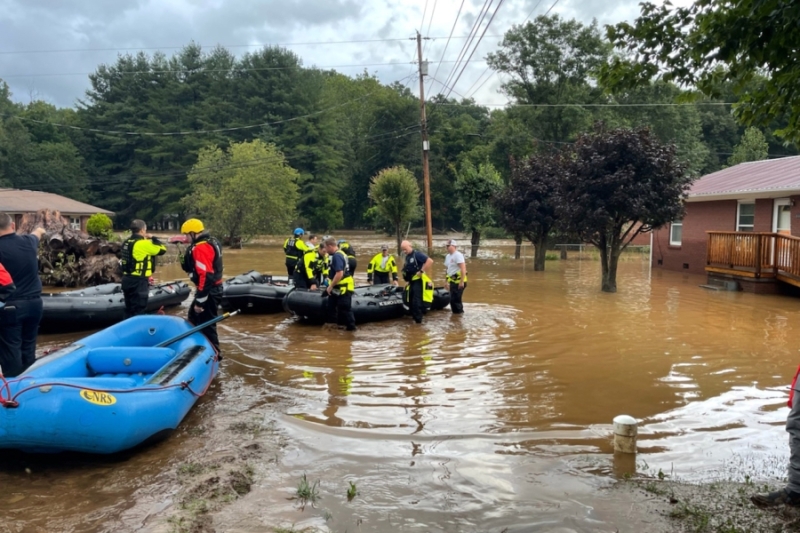 
When Tropical Storm Fred made landfall on the Florida panhandle in mid-August of this year, I never imagined it would be a major threat where I’m currently stationed in Western North Carolina. Being someone who was raised on the coast of Florida, I’ve weathered my fair share of hurricanes and tropical storms over the years. And I’m familiar with the threats associated with those storm incidents – flash flooding, storm surges, wind damage, tornado activity, etc. So, as TS Fred crawled across the Southeastern U.S. and slowly edged into North Carolina, I expected the impacts to be relatively mild. I wasn’t prepared for the damage that would ensue when, in a 48-hour period, over 10 inches of rain accumulated in many parts of the Pisgah Forest and surrounding counties.

Rain pouring over the mountains triggered immense landslides, wiping out segments of underlying infrastructure. As water drained into swelling creeks and rivers, water levels rose several feet to record heights, causing flash floods that swept away trees, automobiles, and mobile homes. In some spots, the surge of rushing water was powerful enough to wash out bridges and roads. When the water began to subside, the human cost of the flooding became a reality as reports of at least six deaths and dozens of missing persons streamed in from local communities like Cruso and Canton.

In the days and weeks following the incident, my colleagues at the USFS Pisgah and Appalachian Ranger districts managed emergency response operations within the hardest hit portions of Forest Service land. Local district staff members and an interdisciplinary incident response team spent countless hours surveying and documenting roads, trails, bridges, and recreation areas for storm damage. Waterways and recreation areas where erosion and debris threatened public safety were closed off and monitored to prevent injury.

On a two-week emergency detail to the Pisgah district, I worked with heritage professionals to help survey badly damaged bridges, trails, roads, and archaeological sites throughout the district. We worked with NC Department of Transportation officials to identify, monitor, and preserve heritage sites while planning and implementation of repairs. During my details, our team was able to provide specialized feedback to state engineers, which allowed us to coordinate repairs to damaged infrastructure without destroying neighboring archaeological sites.

I’m glad I had an opportunity as a Resource Assistant to see Forest Service employees working with the state and local communities to help rebuild piece by piece in the wake of a natural disaster. It’s likely that the millions of dollars of damaged caused by TS Fred will take years to fully assess and repair. And the funding and resources required for recovery can be stretched thin as the other Forests deal with emergencies like wildfires and hurricanes striking other parts of the nation. While the looming threat of climate change makes the challenge of dealing these types of incidents even more daunting, it’s also heartening to see local residents, state officials, and federal agencies working together to support affected communities.