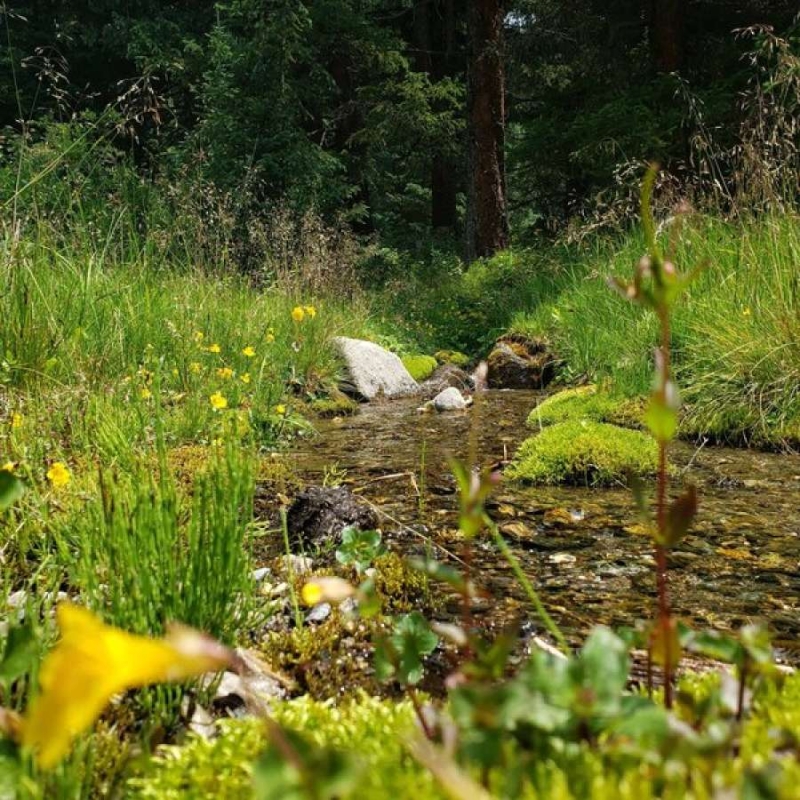 If it is a Native Species, Why is it Still Causing
19 September 2021

If it is a Native Species, Why is it Still Causing Problems? The Never-ending Saga

Ready for another update from the Gunnison National Forest?

Today, I will start by rewinding a bit. In my last post, there was so much going on that I couldn’t even fit it into one blog post! So, I’d like take some time to address some of the other fun work activities I did in early July that did not make it to the last blog post.

In early July, I helped the timber crew with inspecting their plots. What kind of plots, you may ask? Well, part of the forest’s duties include replanting and restoring the forest in their jurisdiction. When it is time to plant little saplings to grow the next generation of trees, the Forest Service will hire contractors to plant them. However, it’s not as easy as just placing a little sapling anywhere you feel like it and leaving it be. There are quite a few guidelines that planters need to follow in order to ensure that the sapling successfully matures. Some stipulations include: providing proper shade, planting deep enough to cover the roots, gently planting it to avoid bending the roots… etc. These are just a few requirements for a proper planting. There are so many more!

If the trees aren’t planted properly, this could lead to the loss of newly planted saplings that came all the way from Nebraska! Yes, you read that correctly. All of the saplings that Gunnison National Forest receives come from the nursery in Nebraska National Forest, which is an incredible place considering it is a completely man-made forest! This nursery doesn’t just provide saplings for our forest. It is a national service provided to many Forest Service districts and provides an estimate of three million saplings per year. That’s a lot of future trees!

My role was to assist the timber crew as they inspected the plots that had already been planted with saplings. We were there to inspect quality of work and unfortunately, if something is out of place, it ends up coming out of the planter’s paycheck. Thankfully, plots weren’t so bad on the days I helped, and we got some really great views at nearly 12,000 feet! 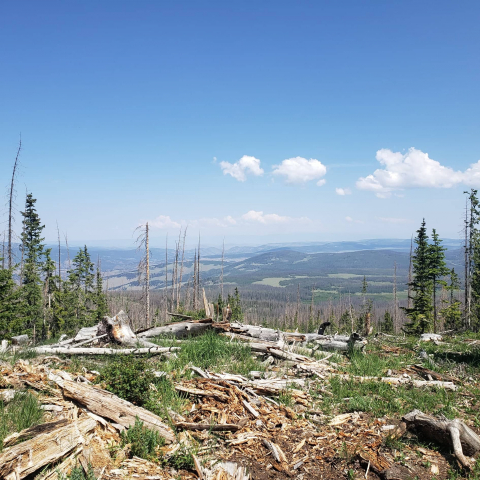 Later on in the summer, I got to hop on the Forest Health crew to assist with checking beetle traps! The Forest Health department in the Forest Service works diligently to keep tabs on all of the diseases and pests present in the forest and to control them as best as they can. I’ve been dying to work with the Forest Health folks since entomology has a special place in my heart. We checked traps that were set for mountain pine beetles and spruce beetles, both of which are currently causing outbreaks in the Gunnison NF. Something I learned right off the bat on my first day with the crew – none of these beetles are invasive! Sure, there are invasive species present in this state and the rest of the country, but the beetles causing the real damage to the trees out here in Colorado are all native. What’s occurring is actually very interesting, and serves as another piece of the story we stitch together to understand the current wild fire crisis in the country.

For at least the past decade, the state of Colorado has been in a drought. Within the last 3-5 years, the situation has been listed as severe drought in certain regions of the state. Droughts not only cause stress to us and local wildlife, but also to the local plant-life. Trees are pretty tough organisms. They can take a lot. It has always amazed me how resilient trees can be to the elements such as cold, wind, heat, etc. Most of the time, trees can normally handle either a drought or a native beetle infestation. However, the story starts to turn tragic when a tree has to deal with multiple stresses at the same time. Just like us humans, there is only so much stress a tree can handle. These trees have had to deal with extensive droughts and if a beetle infestation is added to that equation, that’s when you start to get catastrophic loss.

In a situation where there is no drought, the loss of trees to beetle infestation is minimal and part of a natural cycle in the forest. The damage naturally expected from these beetles looks more like patchwork on the landscape. You see scattered spots here and there where the trees have died due to beetles, but that’s about as far as the spread goes. These patches create natural heterogeneity in the landscape that provide space for different plants to grow and succeed, and new resources for wildlife to use. 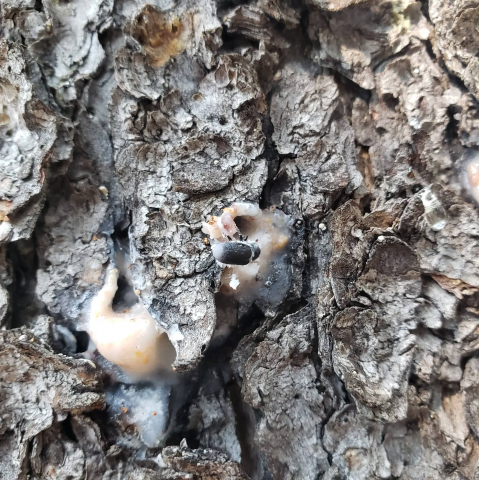 A beetle is being pushing out by the tree. Trees have their own techniques to combat infestation such as ‘pitching’ where sap flows out of the burrows the beetles attempt to make. The sap eventually pushes them out and may kill them, trapping them in sap 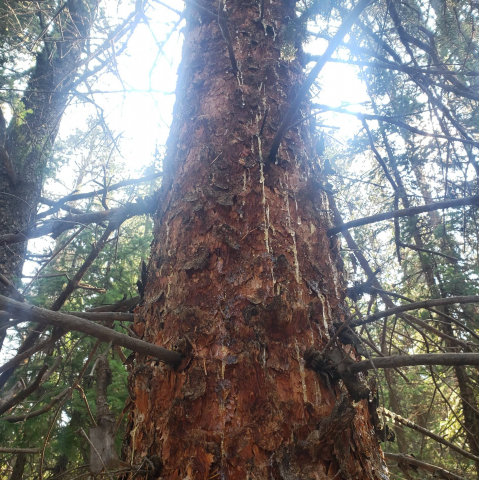 Trails of pitch dripping down the tree. Signs that the tree is having a bad time

Unfortunately, serious outbreaks occur when the trees in the forest are juggling multiple stressors, which leads to entire mountain sides almost entirely covered with dead trees – a phenomenon you can see fairly often in Colorado. These immense patches of standing dead trees become kindling waiting for a wild fire to set them ablaze. 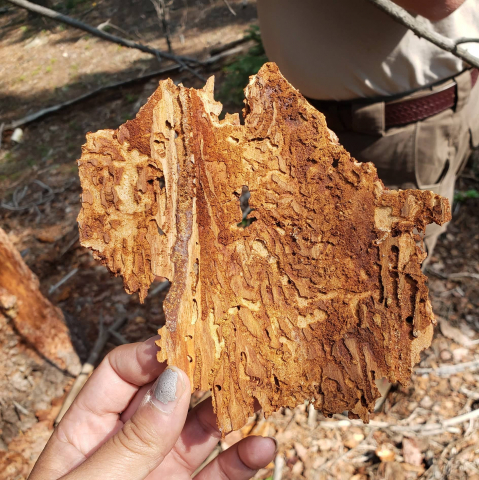 Pathways that beetles have created inside the tree for finding mates and raising offspring. These burrows or paths are called “galleries” 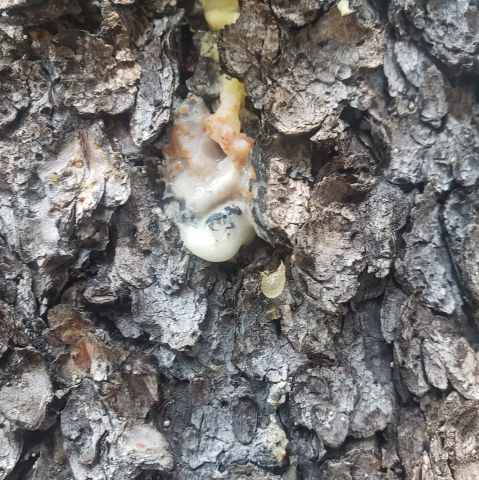 That’s what part of the current situation looks like, but I’m not going to end my blog post in tragedy and despair. There’s good news!

The Gunnison National Forest harbors the largest population of lodgepole pine in the state. Currently, there is an outbreak of mountain pine beetle in our forest, but there’s good news, I promise! The Forest Health team at Gunnison NF caught the outbreak fairly early and have been working hard to make sure it stays under control. I asked about the status of the outbreak and I was told that the situation is currently under control for that specific beetle. So, hooray! Progress is being made.

There’s so much more I can touch on with regards to how the traps work, why the beetles are doing so well and how the forest treats beetle outbreaks, but I feel like this post is long enough as is. Until next time!