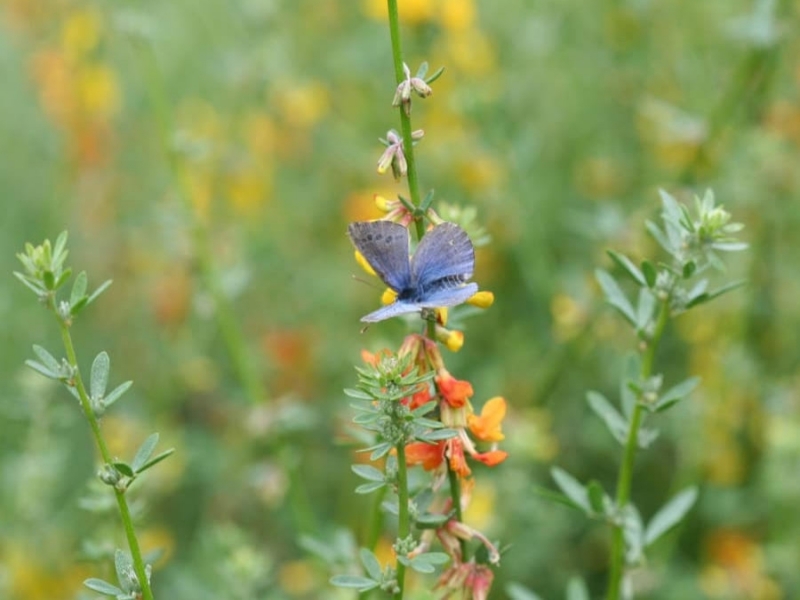 A Small Butterfly with a Big Story

Butterflies are simply a delight. They fill the sky with beautiful colors and patterns, pollinate our plants, and bring joy to our hearts. But did you know that many butterflies are on the brink of extinction? In the US alone, there are 26 butterflies listed under the Endangered Species Act.

Threatened by climate change, pesticide use, land development, and so much more - it is hard to have hope for these butterflies. But over the past 2 months as a DFP fellow, I have had the privilege of working at the forefront of butterfly conservation for one charismatic species; the Palos Verdes blue butterfly.  With a wingspan of only 1 inch, PV blue is quite small. However, what the butterfly lacks in size, it makes up for with a big story.

The Palos Verdes blue butterfly lives exclusively on the Palos Verdes Peninsula in the City of Palos Verdes, CA. It relies on two plants, deerweed and locoweed, throughout the entirety of its life, feeding on plant leaves as caterpillars and nectaring on flowers as adults.  Both plants are what we call early successional which means they are the first to regrow after a disturbance like a landslide or fire. But being early successional also means they eventually get overgrown by other plants and won’t regrow until another disturbance occurs. Unfortunately, early successional plants like deerweed and locoweed can be lost from habitats when natural disturbances are no longer allowed to occur. This happens when lands are protected from disturbances in efforts to preserve surrounding developments like homes. After years of land development on the Palos Verdes Peninsula in the mid-1900s, much of the deerweed and locoweed was lost this way and Palos Verdes blue butterfly populations declined drastically. The butterfly was listed under the Endangered Species Act in 1980 and presumed extinct shortly after. However, in 1994 a small population of Palos Verdes blue butterflies was found at the Defense Fuel Support Point (DFSP) in San Pedro! Conservationists were enthralled at the sight of the tiny blue butterflies and knew they had to fight to keep the species alive.

In the late 1990s and early 2000s scientists began a captive breeding program for the Palos Verdes blue butterfly. After a few years of trial and error, they were successful at breeding the butterflies in captivity and began releasing them into the wild. With numbers in the hundreds for several years, it seemed like Palos Verdes blue butterflies were on the path to recovery. However in 2015, drought, a steady decline in locoweed and deerweed at DFSP, and several other factors caused the butterfly population to once again crash.

Luckily, there are several dedicated organizations that are keeping the species from extinction and plans for species recovery are currently in the works. The Palos Verdes Peninsula Land Conservancy has protected over 1600 acres within the historical range of Palos Verdes blue butterfly and is planting deerweed and locoweed to restore the butterfly’s habitat. The Butterfly Project at Moorpark college has continued to breed the butterflies in captivity and released over 1000 this year at newly restored sites. The Urban Wildlands Group continues to monitor the land for butterflies, locoweed, and deerweed.

During my DFP fellowship, I have been lucky enough to work with each of these dedicated partners to develop a conservation strategy for the USFWS that will identify actions we must take to aid in species recovery. Through strategic planning, cooperation, and coordination, I believe the Palos Verdes blue butterfly can make another comeback!